I've said a million times that I never thought I would do any sort of art besides writing. Every day I look forward to the next time I will have time to grip a brush and smear my creativity onto a canvas, to learn something new and most of all share my art with people.

Over the past few months I've followed tutorials. I've refrained from posting on my blog as I've been working on a painting for eight weeks now. This painting was one that was started for a painting course at the Boston Center for Adult Education. The painting style of the teacher there and the tutorials that I have completed online are very different. With the BCAE course, I find that you paint exactly what you see and do not paint the entire background compared to a "paint and sip" where you do. It broke me out of my comfort zone and I had a tough go of it. However, this was the only new thing I was taught in the class. Everything else I would either read about or watch YouTube videos for. The theory of painting, according to the instructor, is to learn by doing.

For the first class she wanted us to select a painting we really liked and wouldn't mind trying to replicate. I had a problem with this at first. I didn't think that artists painted other artists' paintings. Isn't that considered forgery? Well, Picasso said it best, "Good artists copy, great artists steal." Had I realized this, I may have chosen something different. I wound up selecting a photograph of geraniums in a small blue pitcher, with a rag, and plastic mesh shopping bag. 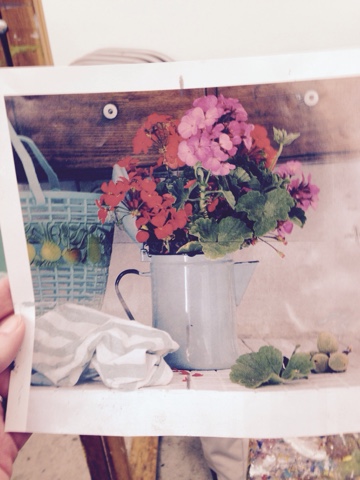 I liked the colors. They were not ones I usually worked with and I had a hard time painting flowers to begin with, I thought it was a good choice. The teacher would have rather me choose a painting. I can see why now. It is so that one could learn the techniques that a master painter used. She said it would be ok for the class. I thought it would be a two week painting and then I'd move on to something else. Yeah right.
The instructor told us to do an initial outline of the painting. We could draw it and then paint (I should have done this) or we could just start painting. Either way the pencil would be covered with paint. I just started painting. As I started the teacher noticed that I was going to begin with the background first. The cabinets and wall and the surface underneath. She said that this is not what artists do, this is what paint and sips do and that they are only good at one thing and that is to getting people to paint. Instead she told me that the an artist only paints what they see. Meaning literally just that. According to Cinnamon Cooney, the Art Sherpa, this is exactly what they did because of lighting issues. It's not like today where we can just snap a photo.
So when I painted only the outlines of what I saw after much time without glasses and squinting, here is what I came up with. 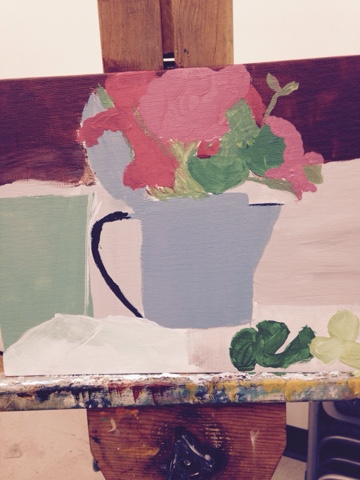 The first class was not a success for me. I looked at big globs of paint and felt discouraged.
I felt worse during the second week. 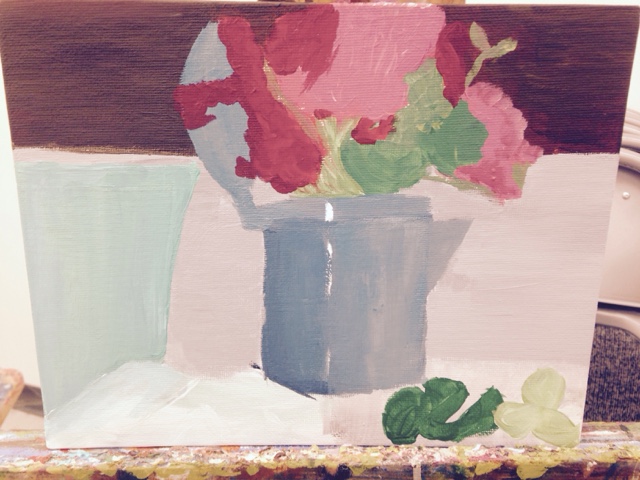 It wasn't until the third week that I felt more comfortable with being in this class. I painted a leaf in the middle of the flowers and all of the sudden excitement breathed through and I was willing to let go and just follow the process. 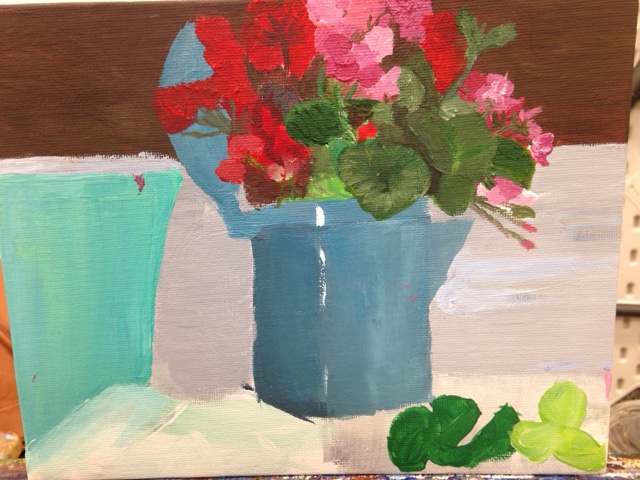 I was still doing tutorials on the side. I felt like I still needed some fun things to do and that this was how I would be calm at home and I'd leave the other painting for class. Other students took their work home and some even finished them which did put me on edge. But when I think about it, I knew that other students (most of them) did not have children. Who can paint when you have a little one running around, who is just so adorable, and makes you want to squeeze hug her every second?
Here are what my paintings looked like over the last few weeks. 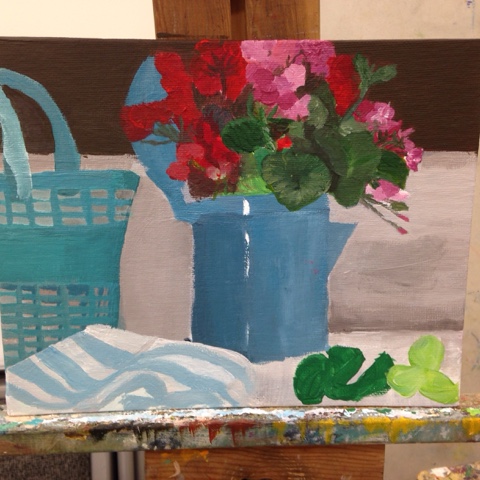 And the week after. 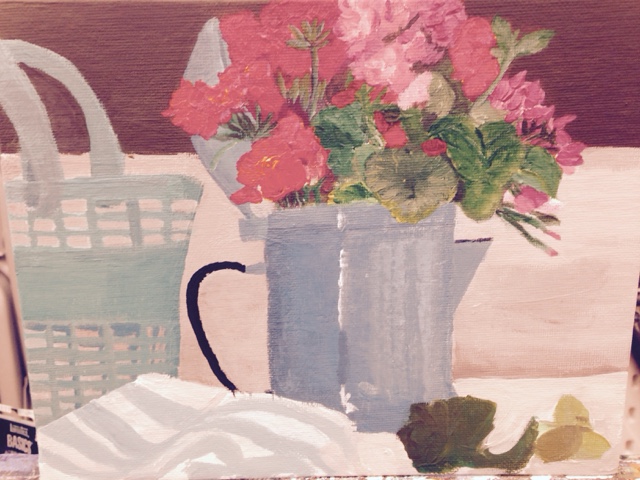 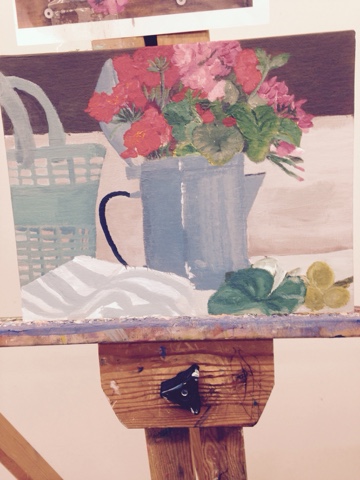 And here is the one after I learned through a tutorial that sometimes it is a good idea to grey your greens with... Red! 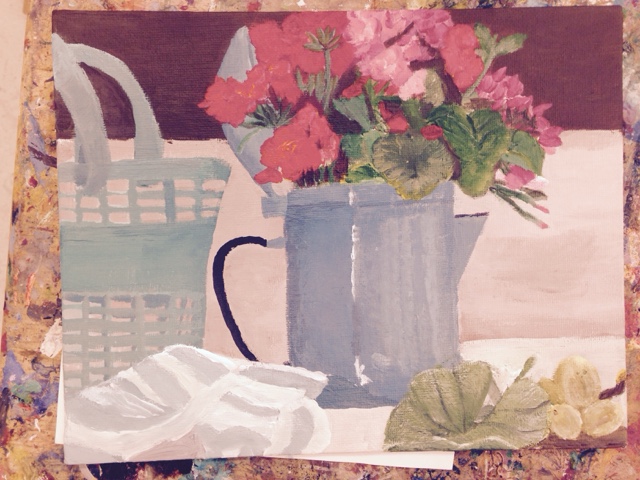 The last week I really had a problem with the rag. I didn't like it. I thought it would be easy. It turns out fabric is very hard to paint. Many artists struggle with it. I can see why now. I watched a few you tube videos on how to do it, sketched it out and read books. To be honest, if I had started with the rag inprobably would have chosen something different. Here is the final painting. 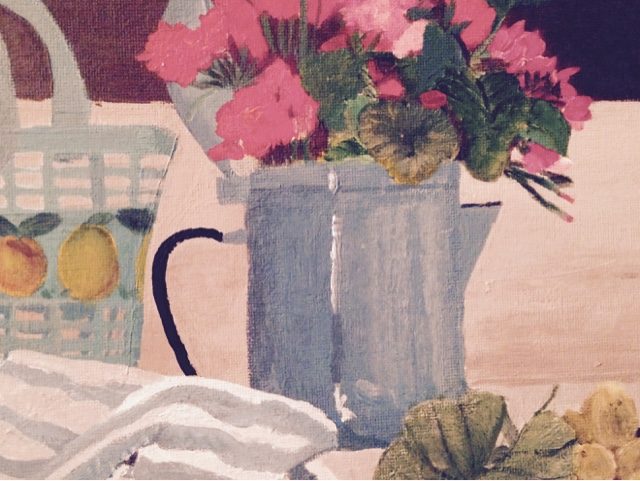 The picture doesn't do it justice. It really doesn't. This painting is the result of eight weeks of hard work and perseverance. I learned to be so patient throughout the process. It really was worth it. I also learned that the end result is never permanent and that I can change it whenever I want. As one could tell, I did change it several times.
Painting applies to every day life. You can change anything you want. Nothing is set in smears. What used to be in a painting doesn't always have to stay there just like life.
I hope you enjoyed this!
Posted by Unknown at 3:48 PM