Over the past month, I've heard Dickens's name mentioned many times. Yes, it is the holiday season for which he wrote many a novella or short story so he should be named. Yet each time his name rang in my ear or ran across my mind as I read an article, it was for a different reason. I am now going to share something with my small audience of readers. My goal this year is to read ALL of  Charles Dickens's works.

I must confess, there are certain books of his that I have not yet read, such as "A Tale of Two Cities" or "Oliver Twist". Some people would be shocked to hear this. I don't care. I am coming out of my depraved status and choosing to have a scholarly year of Dickens. I have only read two books by Dickens; "Great Expectations" and "A Christmas Carol". Many people and works refer to Dickens as being the king of character sketches or of plot. Other references admire him for being a tireless writer often overworking himself. Other people do not like him because of the life he lead and because of what transpired between he and his wife. To be honest, I want to read his works only for the writing, the complexity of his plot and characters, not admiring him for the life that he lead.

Last night I read an article that appeared a few weeks ago in the Boston Globe about Dickens's visit to Lowell during his 1842 visit to America. In addition to looking at the cleanliness of the Lowell Mills and the city itself, he may have borrowed some aspects of a few stories written by the anonymous mill girls in their literary magazine called, "The Lowell Offering" and used them in his own work "A Christmas Carol".

In the month of November, a new book came out from Donna Tartt called "The Goldfinch". She cited Dickens as being her inspiration for her character driven plot that has mesmerized the critics. Over the next year I hope to read her novel as I have not yet read it. I find it interesting that authors who are writing today are still using Dickens as a model of great literature when there are more contemporary authors who they can use.

Now for the part that really hit home with me and showed me that maybe I should read all of Dickens. Upon opening a new book (graciously borrowed from my well-read aunt), Irving's "In One Person" has a main character, Billy. He relates to his reader that the reason he became a writer was because of "Great Expectations". He alliterates to the clumsiness in Dickens's early years as a writer by comparing his texts. I hope to be able to gain perspective that will allow me to come to my own conclusions.

These three coincidences, along with the impending movie release called "The Invisible Woman" based on Claire Tomalin's book sharing the same name. The book speculates that Dickens had an extramarital affair with Ellen Ternan, an actress who was chosen for his play, "The Frozen Deep".

For the above reasons, I am choosing to read all of Dickens's works in chronological order and writing about them here on my blog. It is a huge task to do this as some of these works are above 500 pages. Wish me luck. So here we go... Beginning with "The Pickwick Papers".
Posted by Unknown at 4:40 PM No comments:

About a week ago, I finished Stephen King's book "11/22/63". Whenever I read a paragraph of his writing it is as if I never left my small quiet teenage bedroom. I am transported back to my childhood home in Lowell whenever I lift the cover of one of his books. Maybe it is the fact that he was once a mill worker, and he (like I) comes from a family of mill workers and laborers. Maybe this book resonated with me because I also come from a family of teachers and this book was about a teacher. Who knows? What I do know is that it was entertaining from the moment I flopped into his rabbit hole of time travel.

Being from Massachusetts (the home state of JFK) and since it was the 50th anniversary of his assassination, I decided it was an opportune time to read this book. From the moment I opened the book there were a series of "harmonies".  I attended Zero Point's Theater production of "Killer Joe" and upstairs from their show New Repertory Theater's version of was "Camelot" was being performed. "Killer Joe" by Tracy Letts takes place in Dallas, where Kennedy was assassinated. "Camelot" just happened to be John F. Kennedy's favorite musical. I was wrapped in a vortex of the Kennedy assassination. There was no escaping it.

While out for a walk on a cold December day, I stopped in a Honey Dew Donuts in Wakefield and got myself a hot chocolate. I sat at the counter looking out onto Main Street and looked to my right to see this: 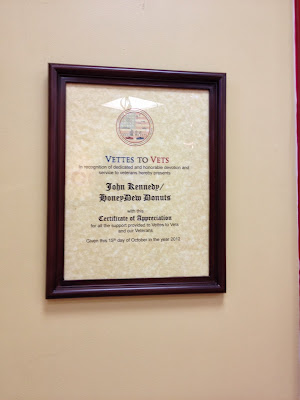 Pretty weird, right? I had to take a picture because I thought that there was no way anyone would believe me despite their being a number of people with the same name. As Jake Epping (Stephen King's main character) says, "the past harmonizes with itself." I was surprised because I didn't expect King's Jimla to come for me in a donut shop. I thought it would stay locked in between it's pages. There were other coincidences that happened through the month, like maybe some exhibit that I wished to see that wound up being at the JFK library (I can't remember what it was now).

Anyway, the book was fabulous. I couldn't put it down. I was satisfied that the book didn't end in a huge explosion of bombs or fire (which is typical of Stephen King novels). It was well researched. I would have finished the book sooner, except that I have a young beautiful child for whom I would do anything for, which includes haulting my reading to give her tons of love and kisses.

Now I am onto my next series of coincidences. John Irving's "In One Person". I'll write about those tomorrow.
Posted by Unknown at 4:53 PM No comments:

Welcome to the beginning of my blog. This is my second endeavor into the world of blogging. The first didn't go as I planned. Visiting writers's houses all over New England is tough work. It turns out that not too many people are interested by it when they are from New England. It figures that it only happens to nerdy types of people like myself. People who are recluses huddled in the corner reading and praying that the 14 month old will go to sleep so that I can fit in more reading/writing time before I in turn... fall asleep.

I must confess that there are many people who thought that I should start a blog seeing that I possess way too many weird things that go on in my life. Many times I wait a few days before I say anything because... A. It could be way to embarrassing to divulge the first day. OR B. There are just too many things going on that I haven't had time to say anything to anybody. And then there is C. Usually that includes people that I may end up hurting if I were to put sensitive content on the Internet. People tell me I shouldn't care, but those are usually the same people who would take issue with it, hence my hesitance.

More often than not, I just want a place to compile a bunch of my nerdy little findings in some other place than Facebook and Pinterest. Twitter is just too text confined. When it comes to me talking to friends and family about literature and writing, I bore them to death because of all the minuscule facts that I read on the Internet.

So here we are. At the beginning.
Posted by Unknown at 3:51 PM No comments: